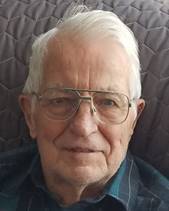 Allison A. (Al) Fishwild, of Rawlins, Wyoming, passed away peacefully July 17, 2019 in the Rawlins Rehabilitation and Wellness Center, surrounded by his children. Al was born May of 1930 in Monticello, Iowa to Fay and Allison Fishwild Sr. He married Dorothy McKay in July of 1951. He was in the Air Force stationed at the Soo Locks in Michigan, when he met Dot. After being discharged they moved west where he worked for Western Electric. He later worked his way to manager of Rawlins Mountain Bell. Al was a member of Christ Lutheran Church in Rawlins. He was an avid Rawlins High School Sports Fan and received the honor of becoming an "Outlaw Forever" in 2016. Family was everything to Al. Al and Dot loved camping, boating and traveling. They opened their home to many people, who needed help. Al and his best friend Bud Greene spent many hours snowmobiling, camping, fishing and 4-wheeling. Together they were Boy Scout Leaders for several years. Dot and Gladys Greene accompanied the two on many trips and cooked countless meals for Scouts and their families. Al was preceded in death by his wife, of 68 years, Dot, his father Allison Sr, mother Fay, stepmother Sophia, grandson Tony Jordan and granddaughter Ashley Trapp. Al is survived by his sister Ruth Stewart, brother Richard (Joyce) Fishwild, daughters Kathy (Pat) Jordan, Linda (Steve) Skordas, his sons Dave Fishwild and Dan (Sue) Fishwild. He has 6 grandchildren, Sean (Tina) Jordan, Andy (Kari) Skordas, Stephanie (Chris) Murry, Josh (Tara) Fishwild, Heather (Andy) Engle and Brandy Childress. He was blessed with 15 great-grandchildren. A Celebration of Al and Dot's lives will be held at Christ Lutheran Church in Rawlins. The service will be Thursday, July 25, 2019 at 10 a.m. officiated by Pastor Terry Wiley. Burial will follow in Rawlins Cemetery, where grandson Tony will also be buried. In lieu of flowers, please make donations to Pet Partners of Rawlins or Rawlins' Christ Lutheran Church Memorial fund. Jacoby Funeral Home is in charge of arrangements. Tributes and condolences may be offered online at www.jacobycares.com.

Burial will follow the reception.
To order memorial trees or send flowers to the family in memory of Al Fishwild, please visit our flower store.