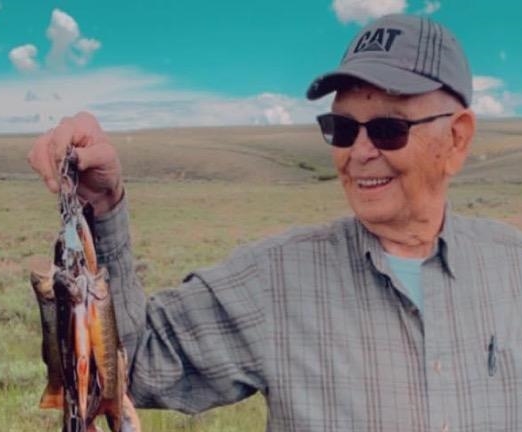 Ben Vialpando, Jr. born January 8, 1935 in San Luis, Colorado, passed away Friday evening September 4, 2020. Ben passed with his family by his side. Ben was an avid fisherman with all the special “spots.” He always provided for his family no matter what type of job he had to do. Ben proudly retired from the Union Pacific Railroad as a conductor. He met many of his closest friends while working for UP. His eldest son, Anthony Vialpando, followed in his footsteps at UP.

Ben was known around town as an ornery yet lovable personality. He always was joking around with anyone in his path. Ben always had a smile on his face and loved to play pool at the Rifleman Club Bar. Anyone who played him knew he was a formidable opponent because they likely lost their money to him!

Ben is survived by 2 of his 3 children whom he adored. Anthony Vialpando (Cristie)  and Bridget Hall, 5 grandchildren, Toni Lynn Rodriguez, her 2 children Micah and Caleb, Casey Vialpando (Stephanie) his 2 children, Madison and Lilly, Kelly Montejano (Frank), their 3 children, Frank Jr. “Kiko”, Jennica and little Annalee, Jeremiah “JJ” Hall (Kellyann) and his 4 children, Ashley, Sam, Shanti, and Heidi. Amber Hall (Harrison) her children Alesia, Grayson and Keenan. Ben was also survived by his sister Ida Peterson and her family. His brother Leo Vialpando and his family. Finally, Ben was survived by many other loving family members including all of his loving wife’s family, who all loved him like their own.

Ben was preceded in death by his beautiful wife Prady Vialpando, his son to whom he was very close Paul Vialpando, and his mother whom he adored Beatrice Haas, his father Ben Vialpando Sr., 2 loving brother’s Emilo and Victor, and 2 infant grandsons.

Ben will be missed by many and was loved by all. There will be no formal services, as were his wishes. His ashes will be spread over his favorite fishing spot, and the family will have a small celebration of life. Thank you for all your kind words and condolences

To order memorial trees or send flowers to the family in memory of Ben Vialpando, Jr., please visit our flower store.