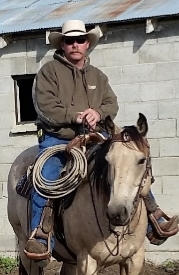 Craig was born April 11, 1963 to Hugh Davidson and Connie (Dye) Allen in Rawlins, Wyoming. Craig graduated from Pinedale High School in 1982 in Pinedale WY where he grew up. Craig began working for Bartlett Oilfield Service in 1985, eventually moving on to Amoco Production Company. Craig met the love of his life, Teresa (Teri), in 1987 and were married later that year, during their 33-year union they had three children they adored. Craig retired from Amoco in 1992. He and Teri decided to try their hand at raising apples, and moved to Okanogan, Washington, learning the orchard business from Benson and Connie Allen. They loved the orchard industry but the orchards did not love Teri in return, causing her to have severe allergies and asthma, forcing them to move back to Rawlins. Craig then worked for Shepard Construction for a short time. In 1996, Craig began work for Williams Field Services in Guymon, Oklahoma; living in near by Hooker, Oklahoma. While there, he was a volunteer firefighter with the Optima Volunteer Fire Department Craig was then transferred to Colorado. Wyoming was home and they missed family and friends so much, Craig decided to leave Williams Field Services, returning home to Bairoil,WY. In 1999, upon their return, Craig began working at Merit Energy, which was later bought out by Amplify Energy, where he was employed up until his death.

Craig enjoyed camping, hunting, skiing, fishing, riding horses, snow machines, motorcycles, side by sides, or anything he could do to get out and enjoy in the outdoors. He dearly loved and doted on his family especially his grand-kids. He loved his work and was loyal and supportive to all of his co-workers, as well as the various boards he served on. He enjoyed spending time with all of his family and friends and will be remembered for many things but mostly his magical, healing hugs. Craig was a true gentle giant, one of the kindest men you would ever want to meet, and would have given the shirt off his back to anyone in need.

Services will be conducted Friday July 3, 2020 at the Jeffrey Memorial Center in Rawlins, WY at 2:00 p.m. with a potluck dinner to follow.

To order memorial trees or send flowers to the family in memory of Craig Davidson, please visit our flower store.