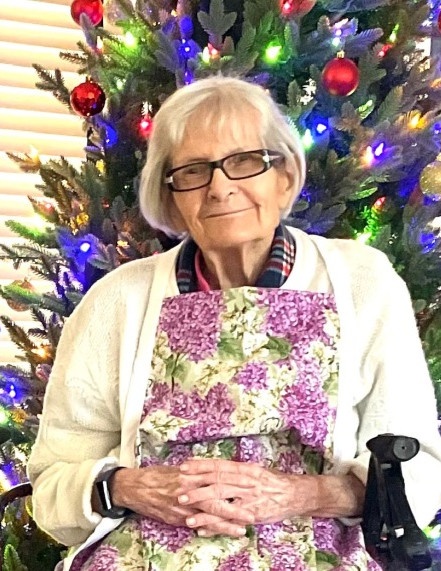 Dorothy V. Page, 88 years old, of Arvada Colorado passed away peacefully surrounded by family on March 12, 2022 in Salinas, California, where she has lived for the past 5 years with her daughter and son-in-law, Dayne and Linda Nix.

Dorothy was born in Denver, Colorado to Norman and Lenore Belding on June 24, 1933. Throughout her childhood she lived in Wyoming and Colorado with her parents, eventually settling in Arvada, Colorado. She attended Arvada High School and graduated in 1951. She married Marvin C. Page (Mickey) on June 30, 1951 and worked for a while with Mountain Bell. She left the workplace and became a homemaker with the birth of their daughter Linda in 1952. They then welcomed their two sons, Michael in 1955 and David in 1961. The family moved to their home on Quay Street in Arvada in 1965 and were members of the Arvada Grace Brethren Church for many years. Dorothy and Mickey were widely known for their hospitality and warm home. They hosted many after church gatherings, with Dorothy preparing her famous grilled cheese sandwiches and Mickey leading insightful and life-changing bible studies. Mickey went to be with the Lord in 2015.

Dorothy is survived by her three children, Linda (Dayne) Nix, Michael (Sherry) Page, and David (Kim) Page, nine grandchildren, and thirteen great-grandchildren. She was preceded in death by her parents, Lenore and Norman Belding, and her beloved husband, Marvin C. Page in 2015.

A Celebration of Life will be held at the Westview Recreation Center (10747 West 108th Avenue, Westminster, CO, 80021) on June 18, 2022 at 1 O’clock in the afternoon.  She will be interred at Fort Logan National Cemetery with her husband.

To order memorial trees or send flowers to the family in memory of Dorothy Page, please visit our flower store.