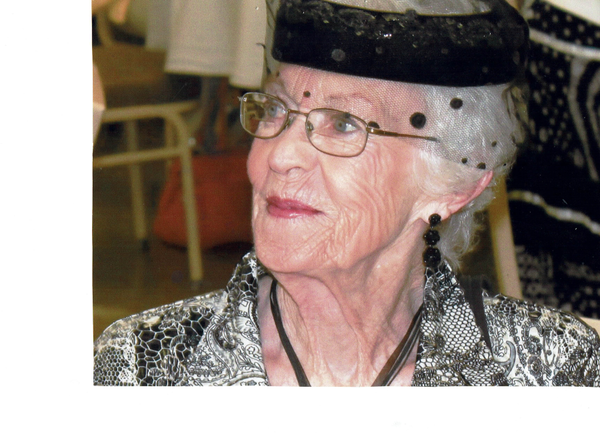 Elva Olson Evans, a daughter of Swedish emigrants, lived in the Upper North Platte River Valley virtually her entire life.  Elva passed away peacefully in her home, her children by her side, on January 18, 2022.

The odds of her parents actually meeting?  Her father, Swan Hjalmer Olson, arrived in the U.S. from Skane in Southern Sweden in 1914 searching for a better life.  Her mother, Torhild (Margaret) Sjoden came from Angermanland in Northern Sweden in 1929 to visit her brother Charles Sjoden, who owned a Chevrolet dealership in Saratoga.  Margaret intended to stay long enough to save for the return trip, however, something else was in the cards.  Swan and Margaret met at Saratoga’s 4th of July rodeo where Swan was selling tickets; they were married on January 4, 1931 in Denver, Colorado.

Elva’s brother Carl Kenneth (Kenny) Olson was born in 1932, and Elva arrived on March 18, 1934.  To say that young Elva was precocious would be an understatement.  One of the highlights of her young life was in 1937, when the family took an ocean liner to Sweden to meet the grandparents and respective families.  While on the ship, her parents couldn’t find her.  Frantic and fearing she had fallen overboard, they found her hiding out on the upper deck.  Young sponges, Kenny and Elva returned to the U.S. speaking Swedish.

Elva was extremely proud of her Swedish heritage.  Elva (which means “eleven” in Swedish) was named after her mother’s younger sister Elva, the eleventh child.  It was tradition then to name the eleventh child Elva, if she was a girl.  When Swedes visited the family in the U.S., Elva would jump right in, speaking Swedish as best she could.  Her parents taught her the about Swedish foods and traditions such as Swedish meatballs and pancakes, and Midsummer.  On Christmas Eve, the traditional meal was Leut Fisk (dried cod soaked in lye) and Korv (Swedish Potato Sausage).  Elva loved to eat pickled herring.  Elva returned to Sweden one more time, taking her mother to visit in 1983.

The Olson family was a ranch family.  When she was very young, her parents leased a ranch on Jack Creek from the Larson Brothers.  In 1942, they purchased the former George Meason homestead on Cedar Creek (coincidentally, George was a great uncle to her future husband, Valle Evans).   In 1950, her parents sold the Cedar Creek Ranch and purchased the Pick Ranch along the North Platte River, north of Saratoga.  Her brother Kenny operated that ranch until it was sold in 2006.

The winter of 1949 is known as the worst winter on record in Wyoming.  Hundreds of thousands of head of livestock were killed in the deep snows, extreme temperatures and high winds.  Kenny and Elva went to town to live with Charlie and Ellen Sjoden for a few months so that they could attend school.

After graduating from Saratoga’s high school, she attended the University of Wyoming for two years, earning a teaching certificate.  The Evans and Olson families, of course, knew each other, but when Valle Evans left for college in 1947, she was 13 years old.  When Valle returned after college and 2 years of service in the Marines, they became reacquainted and began to date.  After teaching school for a year in Thermopolis, she returned to Saratoga for a life on the Evans ranch with Valle.  Valle and Elva were married on October 15, 1955.  Julie (1956), Kathleen (1957), John (1960) and Kelly (1962) were born during the ranch years.

By 1957, Valle’s father, Houston, had contracted Parkinson’s Disease so Valle (age 28) and Elva (age 23) took on responsibility for the ranch.  Ranch life was hard work, but as a rancher’s daughter, she embraced and loved it.  A typical summer day could include:  taking care of the children, doing laundry, cleaning the house, feeding (the children, a hay crew, chickens and sheep), baking pies, driving the hay sweep, going to town for machinery parts, groceries, or to deliver eggs, etc.  Occasionally, she’d find time for a “play date” with neighbors Shelly Trowbridge or Jnell Willford and their children.  Valle and Elva loved to dance, so Saturday nights were often spent at Ten Mile Inn dancing.

In 1971, the Evans sold the ranch and moved to Saratoga.  Valle and Elva went into business, purchasing and operating the Sage & Sand Motel.  Often the family rode motorcycles on weekends with the Art Zeiger and Jerry Welch families or camped with the families of friends such as the Shamion brothers, Clint Craig, Tom McGuire, Ernie Dahlke, Don Sherrod and Frances Kerby.  Jerry Welch taught the family to ski at Ryan Park; there were ski trips to Steamboat Springs, Colorado and Snowbasin, Utah.

Her passion:  History of the Upper Platte River Valley.  For years, Elva produced a column “Reflections from our Files” for the Saratoga Sun.  She researched past newspapers; her column provided the most interesting excerpts from Saratoga’s past.   She led efforts to establish the Saratoga Museum, which included moving Saratoga’s railroad depot to the hill on the South end of town.  Elva and her dear friend Gay Day Alcorn spent hours discussing Saratoga’ history.

Elva was determined to write a book on Saratoga’s history, and she finally did.  She wrote every word by hand at the dining table, and her daughters Kathleen and Kelly typed the manuscript.  She published Saratoga 150 years in 2020 under the guidance and care offered by Cindy Loose.  Former Saratoga Sun publisher and her good friend, Dick Perue, edited the book and provided the photographs from his (and originally Bob Martin’s) historical collection.

Other favorite activities: Gathering an audience, and telling a spicy joke, or several.  Saturday mornings were meant for yard sales.  True to form, she’d chat with her friends and neighbors while searching the town for bargains.

Valle and Elva enjoyed dressing up in traditional attire to drive their Model A Ford in Saratoga’s 4th of July parade.  As empty nesters, Valle and Elva traveled for several weeks each year in a different part of the country, while daughter Julie took care of things at home.  When traveling, they would search out the lunch spot with the most cars (which meant the best food) and in they would go.  Soon, Elva would be engaged in conversation with the local residents.

Elva maintained her sense of humor until the very end of her life.  One day she asked her friend and primary caregiver, Robin Boydston, for a bucket.  Robin asked her why she needed a bucket, and Elva replied, “So I can kick it!”

There will be services celebrating Elva’s life at a later date.

To order memorial trees or send flowers to the family in memory of Elva Evans, please visit our flower store.