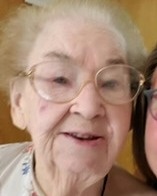 Juanita Sue Cureton of Rawlins, Wyoming passed away on September 30, 2022 at the age of eighty-six at the Rawlins Rehabilitation and Wellness Nursing Home.

She was born on May 15, 1936 in Dale County, Arkansas to Chester F. and Esther (Melson) Tabor. The family lived in Arkansas until 1946 when they moved to Hanna, Wyoming where she went to school and graduated from Hanna High School. After graduating she attended Casper School of Nursing earning her LPN degree and worked at the Carbon County Memorial Hospital until her retirement.

She was an avid sports fan and loved the Colorado Rockies and Wyoming Cowboys and Cowgirls. She could be seen at the Rawlins Outlaw games where she watched her children and grandchildren play. She loved March Madness and made sure she had a tournament bracket to complete.

She was also a great cook and baker. Carrot cakes were her specialty, and she was glad to make one for birthdays or for anyone who asked.

When she was younger, she liked to go camping and was especially fond of Snowy Range and Aspen Alley.

A memorial service will be held at Jacoby Funeral Home on October 6, 2022 at 2:00 PM followed by burial at the Rawlins Cemetery. Pastor Jason Harshberger will be officiating.

Arrangements have been entrusted to Jacoby Funeral Home. Tributes and condolences may be offered online at www.jacobycares.com
To order memorial trees or send flowers to the family in memory of Juanita Sue Cureton, please visit our flower store.