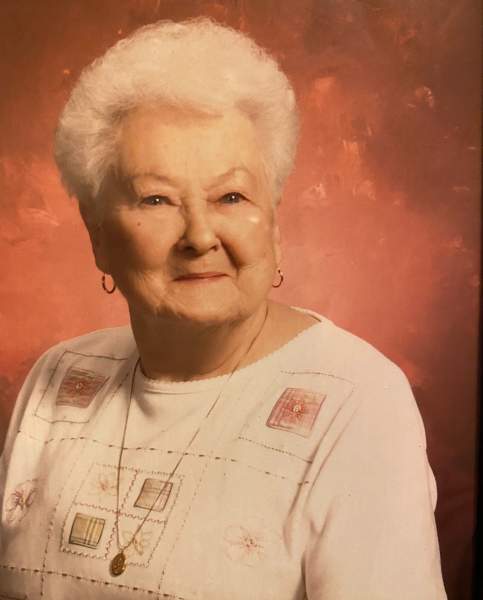 Marian Joyce Anderson Phillips Barlow, resident of Rawlins since 1996, passed away peacefully on August 19, 2022, at the Rawlins Rehabilitation and Wellness Center, at the age of 96. She was born October, 31st 1925 in Jamestown, N.Y. to Harry L. and Mattie R. Staaf Anderson she was the youngest of seven children.
Marian married Courtney Phillips on January 5th 1952, in Frewsburg NY. They had two children Sue (John) Palato & James (Karen) Phillips. She was a devoted house wife and mother. Marian was involved in various community organizations and clubs. After her husband passed in 1992, Marian moved to Rawlins, Wy. to be closer to her daughter, son in law and grandchildren. She married Arther Barlow on October 4, 1997. She was an member of the Rawlins First Methodist church.
Marian was proceeded in death by her parents, six siblings; Lamont, Doris, Evelyn, Don, Jack and Virginia, husbands; Courtney and Arther and son in law John Palato.
She will be sadly missed by her daughter Sue, Son James (Karen), grandchildren Trisha Lucero, Nick (Kassi) Bertogli, Magen (Nate) Donivan and Jonathan Palato, 11 great grandchildren, 2 great great grandchildren, numerous nieces and nephews.
Services will be held at Jacoby Funeral Home Friday August 26, 2022 at 11:00 am. If you are unable to attend you can view the service online. Please click link: https://client.tribucast.com/tcid/9720272059
In lieu of flowers donations may be made to pet partners of carbon county or your local animal shelter.
The family would like to say thank you to the staff at The Rawlins Rehabilitation and Wellness Center for the loving care and kindness they provided to Marian.
To order memorial trees or send flowers to the family in memory of Marian Joyce Barlow, please visit our flower store.