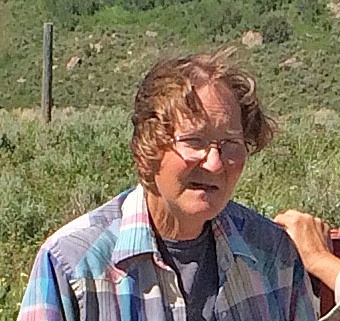 Ann was born on February 8, 1957 to Clair Reeson Dillon and Marjorie Lucille Shockley Dillon. Ann was raised with her brother, Will, and her sister “Boo” in the Little Snake River Valley after her family returned to operate the Dillon Ranch and the Shockley homestead. She graduated from Little Snake River Valley High School in 1975. Ann earned a Bachelor of Arts degree in Accounting from Colorado Mesa University in 1994.

Ann’s true passion was ranching. She operated the ranch with her family members. Ann’s mother Marge, had written, “It wasn’t a huge operation, but we have been happy, living here and working together.”

After the deaths of her immediate family members, she managed her purebred Hereford herd, a farm flock of sheep, and some goats. She was assisted by her Border collies and Keeshonds. Ann was known as an animal lover, and she cared for many orphaned animals.

Ann had an interesting and varied life. She was a hard worker, and always strived to help her family and friends, and to improve her livestock herds. Ann’s careers included working with her father as a coal miner in Hanna, Wyoming, helping her father in his trucking business as a long-haul driver, managing the family service station in Baggs, Wyoming, and of course, operating the family ranch.

When working at the service station, she was shot during an armed robbery and nearly died. Her friend reported that Ann was told she had almost died in the ambulance, but was revived.  “Ann recalled the most incredible, peaceful feeling and wondered why she had to come back. We told her –‘all of your friends need you and the animals even more.’ She never feared death again.”

Ann was an active member of the Friends of the Library in Baggs. She suggested the book on the Orphan Trains that the group will read next. She also supported the Little Snake River Museum and brought animals for the “petting zoo” for children’s activities.

Ann made an event of her annual “cattle drive” when she enlisted friends and neighbors to help her move her cows from their summer pasture on Brown’s Hill to her home ranch for the winter months.

Ann was predeceased by her parents, her brother William Clair Dillon and her sister Marjorie Louis Dillon.

A graveside service for Martha Ann Dillon will be held at 1 p.m. Tuesday, December 22nd at the Reader Cemetery, Reverend Linda Fleming officiating.

To order memorial trees or send flowers to the family in memory of Martha Dillon, please visit our flower store.