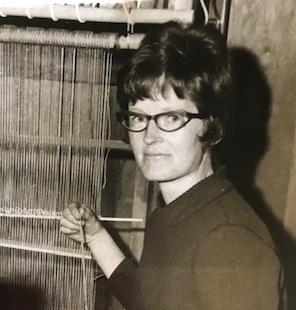 Mary Kay Swedenburg, the eldest daughter of Dr. Paul and Fern Swedenburg, was born in Minneapolis, MN on October 29, 1934. Mary grew up in Swanville and Glenwood, MN where she learned to play the piano and saxophone, also becoming an accomplished ballet and tap dancer, something she loved her entire life.  She graduated from high school with honors, in 1952, and then attended the U of MN where she earned her degree in nursing. While at the University, Mary roomed with Nancy Larsen, from Rawlins, WY who eventually introduced Mary to her brother Charles, who was stationed in Alaska, at the time, while serving in the Army during the Korean conflict. They began writing letters and when he was out of the service, they married in Jackson Hole, WY in 1957.

The years Mary and Charles were married, they had four children. Chris, Heidi, Brett and John Larsen.  Charles worked for the BLM and they moved around Wyoming, living in Rawlins, Worland and Rock Springs.  In the 1960’s they decided to try their hand at dairy farming. Mary also enjoyed razing goats and making cheese. They ran Larsen’s Dairy in West Jordan UT for five years, until Wyoming called them back, on a business venture in Riverton.  It was during those years in Riverton where Mary embarked on what would become her true passion and calling in life. She became interested in weaving, and took classes from the Native Americans at St. Stevens.

Throughout the rest of her life, she dedicated her time to working as a school nurse and raising her children in an old farmhouse they all worked on renovating together. There they raised sheep, sheering them, washing the wool in the bathtub and dying the fleece with native plants. She taught herself to spin the fleece into yarn and weave fabric, eventually making it into beautiful handmade clothing. She made a great deal of her living as a fiber artist, traveling to art fairs.

Mary moved to Lava Hot Springs, ID in 1993 where she bought some acreage out of town and started building a house when she was 63. She also had a great sense of humor and a gift for writing.  She began a column in the Lava newspaper called “the Building Grandma” about the challenges and often comical situations she encountered while building her house. She remained in Lava unit 2018, when she moved in with her son in Rawlins, due to her declining health.

A celebration of her life will take place at her home in Lava Hot Springs, Id. In September.

Memorial donations, in Mary’s name, can be made to any artist of your choosing.

To order memorial trees or send flowers to the family in memory of Mary Larsen, please visit our flower store.