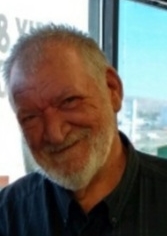 Melvin, age 77, of Rawlins, passed away on Saturday, January 16, 2021 at the Memorial Hospital of Carbon County.

Funeral preparations were performed by the Jacoby Funeral Home. A Celebration of Life will be held later this spring due to Covid restrictions.

Melvin was born on September 3, 1943 near Manning, Iowa, the son of Joseph and Collette (Reinhardt) Hoffman. Melvin married Barbara Hedberg and to this union 5 children were born.

Melvin worked in the maintenance department for the Best Western Hotel. Melvin enjoyed visiting with people and he never knew a stranger. He was a member of the Jesus Christ of Latter Day Saints.

On March 2, 2017, Melvin married Victoria (Bertrand) Howell in Rawlins. Since retiring, Melvin has traveled and visited with family and friends. He took pleasure in working with his animals on their acreage.

Melvin was preceded in death by his parents, Joseph and Collette (Reinhardt) Hoffman and his son, Johnathan Hoffman.

To order memorial trees or send flowers to the family in memory of Melvin Hoffman, please visit our flower store.