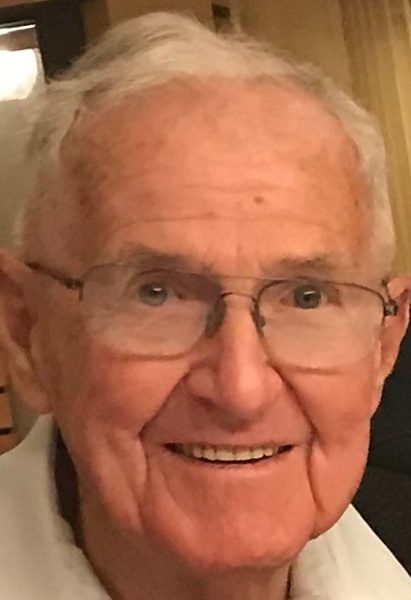 Morgan Lewis Evans, Jr. passed away on Tuesday, January 14, at his home of 62 years, in Rawlins, 8 days shy of his 86th birthday. Morgan was born on January 22, 1934 to Morgan Evans, Sr. and Roxie Divine Evans.  He was raised with 5 siblings at the family home on Mahoney, attended Rawlins Schools, graduating from Rawlins High School in 1952.  He had one semester at the University of Wyoming, playing his beloved basketball only to have to return home to care for his family after the death of his father, in 1953.  He was a caring son for his mother until her death in 1973.

On December 13, 1958, Morgan married a Hanna girl, Bonnie Veitch Evans.  They had three children, Gayle Denise, Morgan Bart and Michael Bret.  He had an incredible work ethic that took him to jobs at the local bakery, delivering the Daily Times and Grit, working on Sun Ranch, the Venice Lounge, other odd jobs, and the Sinclair Refinery.  He was laid off in 1963, so he moved the family to Salt Lake City to attend barber school.  Returning to Rawlins a year later, he started his 46-year career as a barber, working at the Ferris Hotel Barbershop under master barber Joe Peach.  Several years later, he purchased the shop outright and was a fixture in or behind the chair, providing laughs, great conversation, memories, and the perfect flattop, for the thousands who stopped in.  With the demolition of the Ferris a reality, he moved across the street to what was the Rawlins National Bank building and set up shop there until his retirement in 2011, due to increasing macular degeneration.

With some of his many lifelong friends, like Pete and Donnie Corson, Daryl Acton, Don Pixler, the Hornbeck brothers - Tom, Jack and Andy, he had some raucous adventures.  The best was The Venice Lounge town team basketball and he was known for taking it to the hoop with the infamous Morgan hook shot.  He coached little league and 4-H basketball, winning many championships of his own. He was always present for his children’s sports events, traveling to all corners of the state and joyously in the crowd for his son’s State Championship basketball win in 1982.  For that, he became a forever grateful friend to Coach Toni Windis.

His many activities included the love of God and the Rawlins United Methodist Church, serving in many roles, ushering and attending Sunday School throughout his life.  He helped build the Washington Park Swimming pool, assisted at the local ice-skating rink, served on the recreation board and even umped local baseball. He and his friend Daryl Stubbs were co-directors who started and ran the local Elks Hoop Shoot together.  He was honored with the first Outlaw Forever Award in 2015. Along with his dear friend Gary Eyre and many others, they created The Quarterback Club, which raised thousands of dollars hosting R Club reunions, featuring top name National speakers.  With the money, many Carbon County athletes received scholarships to further their sports and education dreams. Up until his death, he was still managing the balance of the funds.  He looked forward to his yearly trip to the Final Four with his family, his last Minneapolis.   He traveled to many states, to watch his 6 grandchildren, Brenden and Chase Cleary, Drew and Emily Evans and Gard and Maci Evans participate in basketball, baseball, soccer, volleyball, track, or football.

His hobbies included knitting, which he learned from Bonnie when he was recovering from a broken leg, wood working and clock making, thus the nickname Grampa Tick-Tock. He gave up horseshoes because he was convinced it caused his heart attack.  He was passionate about gardening, enough to build a green house and supply many of you with tomatoes.  After the death of Bonnie, in 1993, Morgan lived alone, but soon meet his cherished Patty Pederson.  He visited her in China one Christmas and their friendship grew from there to be a remarkable adventure that included baking, canning, jam making, concerts, travel, and a precious companionship, in which his family is forever grateful.

He is proceeded in death by sisters, Mary Jane Hornbeck, Margaret Farrar, Joni Leary, and brother, Jim Evans. He is survived by his children and spouses, Gayle and Jay Cleary, Bart and Joan Evans, Bret and Cherri Evans, his six grandchildren, beloved Patty, brother Morris Evans, sister in-laws, Esther Evans, Barbara Bell, Adele Beedie, Gerri Kruzik and Sherry Fausset. His many nieces and nephews, their spouses, and children are all remembering Uncle Morgan stories with laughs and tears.

Funeral services will be Saturday, January 18, 11:00 AM at the United Methodist Church, - Rawlins Cooperative Parish.  The family asks that any remembrance of him go to a favorite Rawlins charity, church, youth organization, or foundations like the Jimmy V Foundation for Cancer, American Heart Association, Alzheimer’s Association or the Macular Degeneration Foundation.

To order memorial trees or send flowers to the family in memory of Morgan Evans, Jr., please visit our flower store.