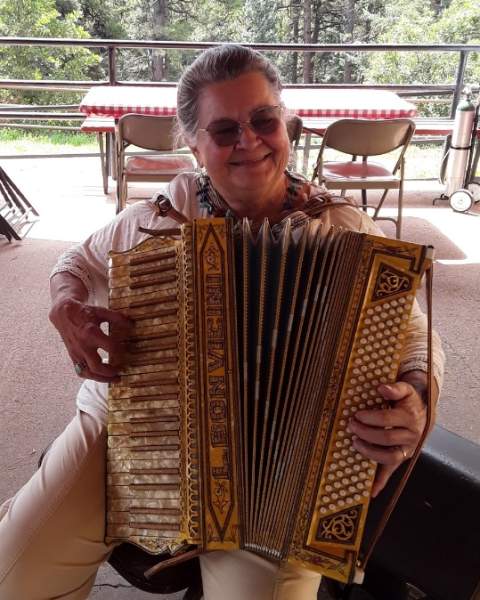 Nancy attended grade school in Easton, California, and high school and college in Fresno. Her parents had a small farm/ranch in Easton, where she had numerous pets, i.e., horses, cats, dogs, chickens, and a pig named Grumpy that ran away every time she was supposed to go to accordion lessons. She loved the outdoors, especially horseback riding and kittens.

Nancy and her dear Steve met at Fresno State College in 1965; however, Steve and his brother used to sit behind her family at church several years before they met formally. They were married in 1968 at St John’s Cathedral in Fresno. A wonderful celebration followed that lasted the rest of their lives.

Steve and Nancy moved to Casper, Wyoming where they began their lives together. Steve worked for the Wyoming Game and Fish Department and Nancy worked for an attorney firm. Daughter Theresa was born in Casper. After 7 years Steve was promoted and they moved to Cheyenne, where Nancy worked, mostly part time, for the State of Wyoming. Their daughter Mary was born in Cheyenne. Both Theresa and Mary attended school in Cheyenne and the University of Wyoming in Laramie. Daughter, Theresa, was married to our dear Greg Kuhn on July 3, 1999. Such a happy and wonderful occasion. She continued on to her master’s as an orthopedic nurse practitioner as CSU Pueblo and Greg is in management at the Pueblo Steel Mill. Our dear grandsons, Luke (Superman) and Jacob (Captain America) are the light of our lives and we all visited as often as possible.

In about 1998, Nancy was in a snowmobile accident that altered her life, so in 2001, when Steve retired, Nancy retired also. In 2006 they sold their home in Cheyenne, retiring to Saratoga, downsizing exponentially into a small townhouse. They also built a home on 3 acres next to their daughter, Theresa, and her family, in Pueblo West, Colorado. Thus began the November exodus to Pueblo and the Easter return to Saratoga that she and Steve enjoyed every year.

In 2021, Steve and Nancy had a wonderful surprise, when their daughter Mary announced that she would be married on March 12th to Bill Krall. Thus began the happiness of another wonderful family beginning. Mary had her master’s degree in Exercise Physiology and works for the County of Pueblo and Billy works for the Colorado State Fish Hatchery in Pueblo.

The wonderful influence of God and friends in Saratoga (and of course her Steve) caused an inner peace within Nancy that continued to the end of her life and gave her much joy. Steve and Nancy were so happy together and God was very generous to them in many ways throughout their lives.

A Memorial Mass will be celebrated on Friday, September 2, 2022, at 10:30 am at St. Anne’s Catholic Church in Saratoga. Inurnment will follow at the Saratoga Cemetery.

Arrangements have been entrusted to Jacoby Funeral home in Rawlins, Wyoming.

To order memorial trees or send flowers to the family in memory of Nancy L. Facciani, please visit our flower store.