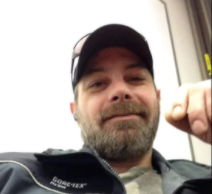 Tyler David Spencer, 43, of Shell Wyoming passed away April 10, 2021. Services for Tyler will be announced at a later date.

Tyler was born March 4, 1978 in Rawlins, Wyoming to Terry and Jim Spencer. He attended schools in Sinclair and Rawlins. He enlisted in the United States Navy, January 2000. Tyler was stationed on the USS Truman and in Jacksonville, Florida as a Parachute Rigger 3rd Class until he was Honorably Discharged, June 2002.

Tyler returned to Wyoming and worked various jobs as a welder, mechanic, and Gold Mined in Alaska. He returned from Alaska and settled in Shell, Wyoming where he was a Supervisor, mechanic, welder, and pursuing a career as a certified blaster with Specialized Blasting Services in Lovell, Wyoming.

Tyler enjoyed the great outdoors, loved his God and Country. He always had a special way with his pets. Tyler never met a stranger and was a true friend.

Tyler was preceded in death by his grandparents, Ivy and Joe Pennington and Irene and Joe Spencer.

A memorial service will be held on Saturday, August 28, 2021 at 1:00 PM at the Carbon County Fairgrounds in the Exhibit Hall. Inurnment and military honors will follow at the Rawlins Cemetery.
Arrangements are entrusted to Jacoby Funeral Home, 702 W. Walnut St. Rawlins, WY 82301.

To order memorial trees or send flowers to the family in memory of Tyler Spencer, please visit our flower store.